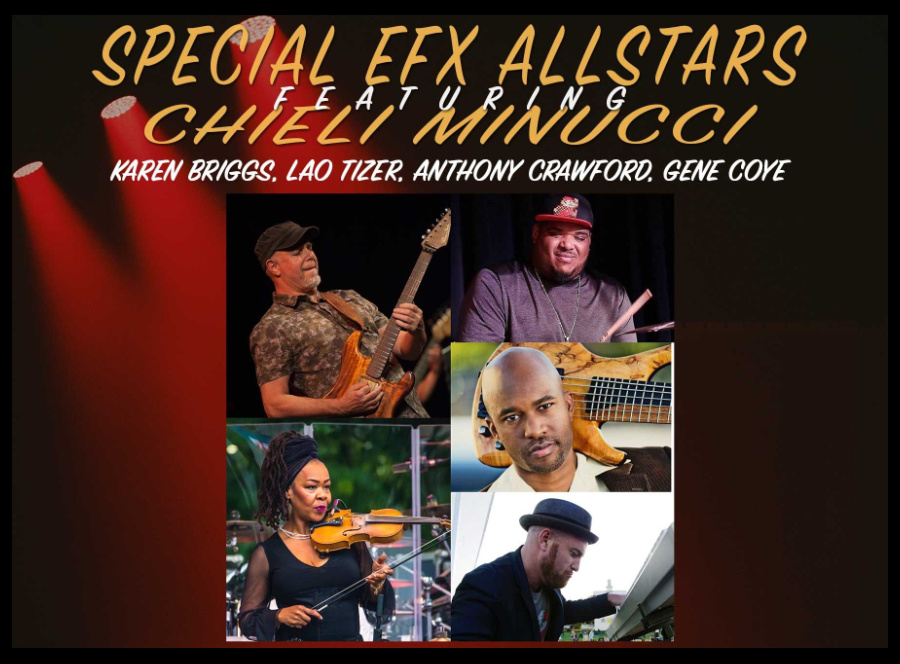 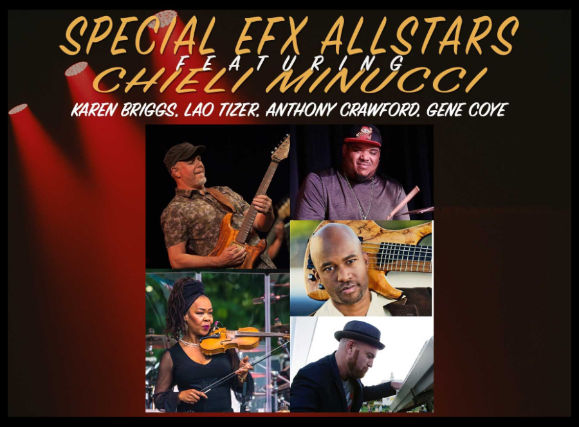 Besides writing and performing his own music, Chieli shares his guitar brilliance throughout the entertainment world. He has recorded and performed with many top artists, such as Celine Dion, Lou Reed, Lionel Richie, Jennifer Lopez, Jewel, Mark Anthony, Michael Bolton, Rupert Holmes, Eartha Kitt, Eddie Fisher, Anastasia, as well as jazz artists Kirk Whalum, Jeff Lorber, Norman Brown, Bernie Williams, Marion Meadows, Lao Tizer, Mindi Abair, Rick Braun, Gerald Veasley, Omar Hakim, and many others.  Although renowned in the jazz and pop world, Chieli is also a gifted television and film composer. He has won 3 Emmy Awards and been nominated 10 times for his eclectic compositional work. His music can also be heard on the soundtracks of the films Bowfinger, Legally Blonde, Panic, and others. Chieli's original scoring work can be heard in live stage productions of Peter Pan, Dora the Explorer, Thomas the Tank Engine, and others.
__________________________

Karen Briggs, also known as the "Lady in Red", is an American violinist. Born in Manhattan to a family of musicians, Briggs took up the violin at age 12 and committed to playing professionally at age 15. Briggs joined the Virginia Symphony Orchestra while still in college, but grew discontented with performing classical music and left the orchestra after four years. Since then, she has performed predominantly in the jazz and contemporary instrumental genres. Best known for spending thirteen years on tour with contemporary instrumental musician Yanni, Briggs received the "Lady in Red" moniker while featuring as a soloist on Yanni's Live at the Acropolis tour. After parting with Yanni in 2004, she toured with other groups including the short-lived jazz fusion group Vertú. Briggs has performed at such locations as Carnegie Hall and the John F. Kennedy Center for the Performing Arts, and has performed or collaborated with Dave Grusin, Diana Ross, the Wu Tang Clan, En Vogue, and Chaka Khan.
__________________________

Keyboardist Lao Tizer is one of today’s rising stars of the world-fusion genre. Tizer’s original music has spurred comparisons of a modern twist to the 1970s and early 1980s heyday of jazz fusion, when trailblazing ensembles like Return To Forever, Mahavishnu Orchestra and Weather Report set the aesthetic standard. Lao’s music has a multi-genre, multi-national appeal and his group, The Lao Tizer Band, has toured the USA and the world while being nominated “Jazz Group of the Year”!  Their new 2018 CD/DVD combo release, Songs From The Swinghouse has received acclaim across the industry while debuting near the top of the Billboard Jazz Album Chart!
__________________________