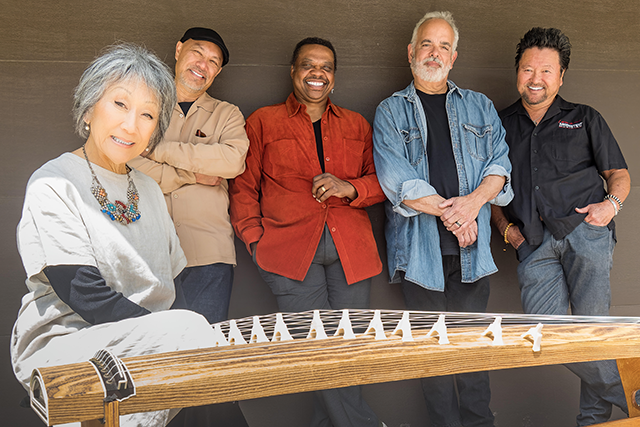 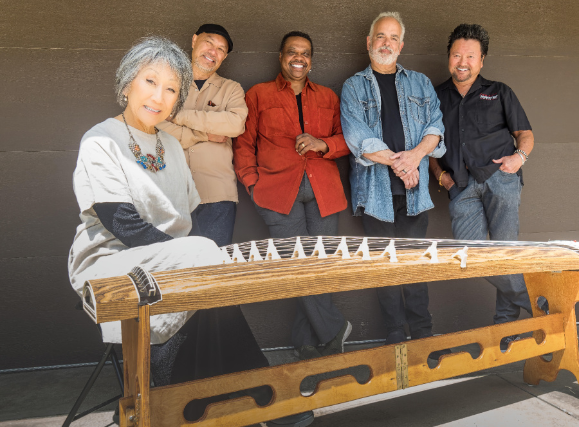 JUNE KURAMOTO, koto
Born in Saitama-ken, Japan and raised in the Crenshaw district of Los Angeles, June epitomizes America’s evolving art and music culture. Almost by destiny renowned koto master Madame Kazue Kudo, protégé of Japan’s most famous kotoist and composer Michio Miyagi, immigrated to the United States and began teaching koto in June’s family home. Using her grandmother’s koto, June, only six years old, found a ‘connection’ for her life in the instrument and Japanese music.
Subsequently June received classical degrees in koto from the Miyagi School of Koto in Japan through Madame Kudo. Along the way she has performed with some of the greatest musicians in the classical world from Japanese masters to Ravi Shankar. But being an American artist she wanted somehow to integrate this music that is her life with the American culture and music that she loves.
This was the beginning of Hiroshima. June has since been the driving artistic force of Hiroshima creating a multi-cultural musical statement.
Her many recording credits include George Duke, Manhattan Transfer, Taste of Honey, Teddy Pendergrass, Stanley Clarke, Keiko Matsui, Angela Bofill, David Benoit, and Ozomatli. She can also be heard on myriad television and movie scores including “Heroes (NBC),” “Simply Ming (PBS),” “Pirates of the Caribbean,” “The Last Samurai,” “Black Rain,” and more including being the co-composer and on-screen performer for the longest running commercial in Hawaiian television history, “Hawaiian Electric Electricity”.
DAN KURAMOTO, woodwinds. keyboards, shakuhachi
A contemporary renaissance man, Dan is a Sansei (2nd generation Japanese- American) born in East Los Angeles. At the age of eleven he joined a competition drum and bugle corp and soon played every instrument while shoring the drum line. In college he abandoned music and joined the tennis team while studying law, psychology, playwriting and photography. He graduated college in painting and drawing and then proceeded to teach Asian American Studies at CSULB for 3 years.
During this period he returned to music, this time teaching himself sax, flute and shakuhachi. Music became his passion and life’s work.
Fueled by the work of the jazz artists he loved, and the incredible creative energy of contemporaries like Earth, Wind and Fire, Santana, and Jimi Hendrix, Dan saw music as the vehicle to give voice to his Japanese-American heritage, and to claim what he feels is America’s greatest resource -- its diversity. He then met June and her virtuosity as a classical Japanese musician, and her desire to create a ‘new music’ inspired their collaboration that became the birth of Hiroshima. Principal composer, producer and leader of the band, his voluminous credits include msical arranger for the Los Angeles and New York productions of “Zoot Suit,” Emmy winning composer for “Bean Sprouts,” composer, Showtime min-series, “Home Fires,” and over 30 plays and movies. His shakuhachi credits include, “Black Rain,” “Pearl Harbor,” “The Thin Red Line,” and “Pirates of the Caribbean.”
KIMO CORNWELL, piano, keyboards
Kimo (Hawaiian for James), was born in Honolulu, Hawaii. This amiable keyboard genius of Hawaiian, Chinese and English ancestry grew up in Kalihi and graduated from Farrington High School. Blessed with the love of music and a palate for ‘plate lunch,’ Kimo soon became renown as one of the best keyboard players from the islands.
After playing and recording with most of the top groups in Hawaii, Kimo moved to Los Angeles to try his hand in the ‘mainland’ music scene. Immediately discovered by touring groups, Kimo hit the road first with Cheryl Lynn (“To Be Real”), and then with a succession of artists including Ronnie Laws, John Klemmer, Al Jarreau, Frankie Beverly and Maze – and Hiroshima. During the mid-eighties, sought after by Hiroshima, Jarreau, and Maze, he chose to become a fulltime mainstay with the band. Working in the capacity of keyboardist, composer, arranger and producer he has become part of the heart and soul of the band and its music.
He continues to work with other artists, writing and producing, and has worked on several record film and television projects with Dan as co-composer and arranger.
DANNY YAMAMOTO, drums, percussion, taiko
A graduate of Dorsey High School in Los Angeles, Danny has had a lifelong love affair with music. Beginning with the accordion, reflective of his eclectic tastes in art and music, he has played virtually all the instruments in a band, but as a tool for self- expression, the drums became his voice. At Dorsey, he found himself in a jazz trio along with bassist (now musician-producer) Larry Klein and pianist (now Downbeat award-winning jazz keyboardist) Billy Childs.
After such a luminous start, he settled in as a music major at UCLA, expanding into ethnomusicology. Playing and recording with a variety of groups, he also became involved with Hiroshima, ultimately becoming a principal member. He has continued to both study and perform in a myriad of musical settings, from TV and film sessions to taiko gigs. After a significant tenure studying drumming techniques with the renowned Freddy Gruber, he has himself become a teacher.
DEAN CORTEZ, bass
Originally from Miami Beach, Florida, Dean comes from a musical family (his dad was a touring percussionist) and started out playing string bass in youth symphonies. His family moved to Southern California, where he added the electric bass. By the time he graduated high school, Dean was the regular bassist with the famed Latin percussionist/ singer Wille Bobo. A founding member of the seminal Latin-fusion band ‘Caldera,’ Dean recorded two albums with them before becoming the bassist on the Boz Skaggs World Tour.

He has since played on over 300 recording sessions, ranging from film, television, and records—including Hiroshima’s first release in 1979. Having played on virtually every Hiroshima album as a session bassist, Dean became a regular in the band during the “East (1988)” tour.
LAND RICHARDS, drums
The incredible Land Richards, a longtime member of our Hiroshima Family joins them on drums. Growing up in Muscle Shoals, Alabama during the 1960s gave Richards the opportunity to witness the birth of the soul music movement. He was born into a musical family—his father being co-writer of the famous hit “When A Man Loves A Woman”—and started performing on drums at age seven, moving on to the local club circuit by age twelve.
Over his long career in the music industry, Richards has performed with some of the best-known acts in the world—including George Benson, Michael Bolton, Natalie Cole, Gladys Knight, Patti LaBelle, Stevie Wonder, Stevie Nicks and Earth, Wind and Fire. In his own words, “Everyday I strive to grow more in both music and technology, because they have become one in today’s music industry