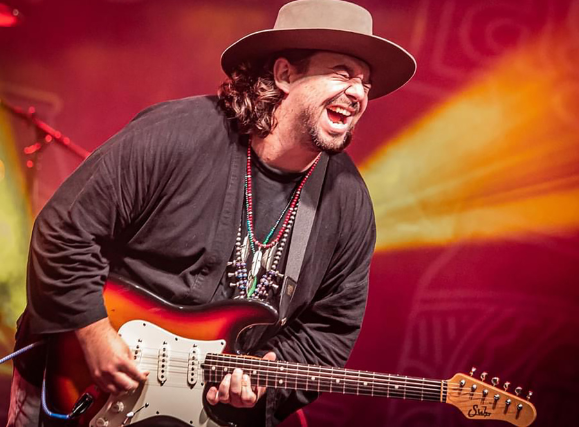 Bay Area native Tommy Odetto is a Blues Rock Guitarist, Singer and Songwriter. Obsessed with music at an early age, his first love was early rock and roll; Elvis Presley, Buddy Holly and Ritchie Valens. When he was 13, he finally received an electric guitar. It was at this time that he started to discover guitarists like Eric Clapton, Jimi Hendrix, and Stevie Ray Vaughan. He wanted to know everything about them, which introduced him to the Blues! Artists like Robert Johnson, BB King, and Muddy Waters reached out and touched his soul and lit a fire inside of him and it has never wavered. Odetto’s goal is always to move someone with his music just like all of the artists that he admires and looks up to. Sharing the same qualities that he aspires to: sincerity, passion and emotional authenticity.
Tommy has been fortunate to perform at Bottlerock Napa 2018, Wisconsin Harley-Davidson Milwaukee HOG Rally in 2019, Summerfest 2021 and twice in 2022. Tommy has been a fill-in guitarist with sixties icons, Big Brother and the Holding Company; toured as the opening act for several shows with John Mayall in 2019; and has been honored to open for an array of great bands; including Foreigner, Cheap Trick, Robert Cray, Christone “Kingfish” Ingram, Ace Frehley, Robin Trower, Marshall Tucker Band, Chevy Metal, The Nielsen Trust, Tommy Castro And The Painkillers, Walter Trout and most recently, Foghat. His talents have found him on stage with the likes of Rick Nielsen and Cheap Trick, Dave Grohl and Taylor Hawkins with Chevy Metal, Michael Landau, Walter Trout, Tommy Castro, and a slew of others.
While gigging through the Midwest in early 2020, Tommy found himself in Milwaukee as the world began to shut down. Rather than return to the San Francisco Bay Area, he spent that time in Milwaukee writing new music and quickly came to realize that the Midwest would be his new home. The resulting album, SOUL ON ARRIVAL, offers Blues Rock with a heartfelt “from the gut” approach. Odetto is proud of this latest release and feels that it’s the first record he listens to and thinks “that’s really me.”