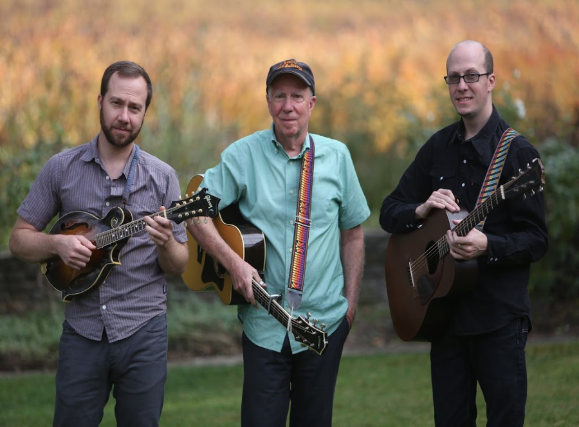 Terry Family Band
It began with a tiny violin presented to oldest son James, then 3 ½ years old, a gift from father to son. The father began playing his guitar for the sons; teaching lyrics to popular songs and having them sing their favorite song “Dead Skunk in the Middle of the Road” by Loudon Wainwright III which they sang at the UC Alumni Camp Lair of the Bear.
Now, years later, the Terry Family Band comprised of the father Jim and sons Clark and Graham are playing together. All of the music is original and comes from the complex experiences of life in Napa, the country and the world.

“This band has prevailing well-adorned musical swells in their seas....what they’ll need one day is a guest spot with the likes of Alison Krauss–they have that dynamic.” John Apice, Americana Highways January 11, 2022.
Terry Family is composed of Jim and sons Clark and Graham (son James lives in Atlanta and joins when the stars align). The music comes from the complex experiences of life, the country, and the world. While the roots of American folk music are prevalent in their playing style, the music is fresh and unique, reflective of the family from which the music originates. Clark and Graham are multi-instrumentalists (violin, mandolin, bouzouki, guitar, vocals) while Jim writes the music and handles lead vocals while keeping the rhythm pulsing in the background with his acoustic guitar. As of March 2022, Terry Family completed a North American radio promotion of its new album Hometown Tragedies, including airplay on The Midnight Special, the highly respected syndicated radio program out of Chicago.
Achievements
● Winner of the 2019 West Coast Songwriters Grand Finals competition at Freight & Salvage in Berkeley for “The Walls Stand On and On,” a stirring account of the story of Emmett Till.
● Winner of 2022 Will McLean Best New Florida Song Contest for “Mercy in the Storm.”
● Folk Alliance International Folk Chart Top Albums of the Month for January and February 2022, for Hometown Tragedies album release, and FAI Folk Chart Top Songs of the Month for February 2022, for “The Walls Stand On and On.”
Notable Press
● Napa’s Jim Terry: “Making the world a little kinder” through music Napa's Jim Terry: 'Making the world a little kinder' through music
● Mercy in the Storm - DGT Multimedia Song Contest Winner and Finishers in the 2022 Will McLean Best New Florida Song Contest - Donna Green-Townsend
● REVIEW: Terry Family “Hometown Tragedies” - Americana Highwayshttps://americanahighways.org/.../review-terry-family.../
● Napa Musician Wins Top Honors In Berkeley Napa musician wins top honors in Berkeley

Performance Date
Performance Name
Performance Info
Performance tickets
Locals Night: The Terry Family & Blue Note Napa Toys for Tots Drive 7:30 PM
Blue Note Napa
Buy Tickets
We use cookies on our website to give you the most relevant experience by remembering your preferences and repeat visits. By clicking “Accept”, you consent to the use of ALL the cookies.
Cookie settingsACCEPT
Privacy & Cookies Policy