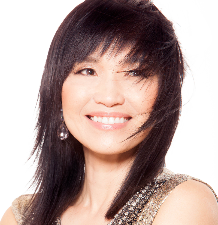 "Keiko Matsui is appreciated not just as an artist but as a humanitarian. She dedicates every song she writes to causes that move her..."-NPR


“My melodies are my living testimony,” declares internationally acclaimed pianist, composer and humanitarian Keiko Matsui. A world citizen, Matsui’s music speaks to the hearts and souls of fans around the world, transcending borders and building bridges among people who share a common appreciation of honest artistry and cultural exchange. “Music creates a oneness,” says the striking, petite powerhouse who has worked alongside everyone from Miles Davis and Stevie Wonder to Hugh Masekela and Bob James. “Journey To The Heart is my gift to my fans. I want to deliver the most beautiful and emotional experience.” Keiko, who has lent her voice to raise awareness for such causes as The Daniel Pearl and the Susan G. Komen Foundations says, “I feel the world is getting crazier and we need to collectively go back and recall what connects us all…our spirits, hearts and our souls.” On Journey To the Heart, Matsui more than delivers what she has come to be loved for breathtakingly beautiful transcendent melodies that transport the listener. A master storyteller, Keiko Matsui crafts passionate and emotive songs with lush harmonies and global rhythms to create timeless musical anthems. ...

Journey To The Heart Keiko Matsui’s 27th recording as a leader, marks the 30th Anniversary since her recording debut and is her boldest statement yet. Helping Keiko to reinvigorate her sound and new acoustic direction are Cuban musicians: bassist Carlitos Del Puerto and drummer Jimmy Branly. Del Puerto, son of famed bassist Carlos Del Puerto, one of the founding members of Irakere, has collaborated with everyone from Bruce Springsteen and Quincy Jones to Stevie Wonder. Conservatory trained Branly has worked with such notables as Flora Purim, Celia Cruz, Sheila E., Natalie Cole and Airto Moreia. “Carlitos and Jimmy are amazing musicians. I admire their artistry, musicianship and spirituality. They are my new family on the road and they bring such a sensitivity and passion to every situation,” shares Keiko. Peruvian guitarist Ramon Stagnero and Venezuelan percussionist Luis Quintero also join Keiko along with special guest harmonica player Gregoire Maret and a sublime string section that augments several of the album’s tracks. Stagnero has worked with such diverse artists as Al Jarreau, Andrea Bocelli, Dianne Reeves and Herb Alpert, while Quintero has been first call for such musicians as Louie Vega, Natalie Cole, Gonzalo Rubalcaba and George Benson. Maret hails from Switzerland and has worked and toured with Herbie Hancock and Pat Metheny among others.

“Melodies are an important part of my music and the melodies on Journey To The Heart seemed to come from another dimension,” shares Keiko. “There is a different energy. I was even amazed myself at just how bright and happy the music is. It does reflect where I am right now.” Matsui conceived over 100 different melodies and motifs for Journey To The Heart and eventually settled on the ten themes featured on the CD. During the initial stages of writing she collected melodies and wrote charts and began recording on her iPhone and a small recorder everywhere she went.

Keiko Matsui took her first piano lesson at five and she made her US recording debut in 1987 with the recording A Drop of Water.

Under Northern Lights followed in 1989 and her subsequent albums of note include No Borders (1990), Night Waltz (1991), Cherry Blossom (1992), Doll (1994), Sapphire (1995) and Dream Walk (1996), which remained on the Billboard Contemporary Jazz Chart for over 15 months and further cemented her reputation as a force to be reckoned with. In 1997, she launched a tour dedicated to raising awareness of breast cancer, and released a four-song CD entitled A Gift of Hope that benefited the Y-Me Breast Cancer Organization. Her music was prominently featured in Say It, Fight It, Cure It, a Lifetime special profiling several courageous women battling breast cancer. In 1999, the pianist performed at "A Golden Moment," a skating concert featuring Olympic figure skaters Kristi Yamaguchi, Tara Lipinski, Ekaterina Gordeeva, and Katarina Witt, which benefited the Susan G. Komen Foundation. 1998 saw the release of her album Full Moon And The Shrine, which was accompanied by the acclaimed PBS-TV special Keiko Matsui: Light Above The Trees. In 2000, the special earned Keiko a National Smooth Jazz Award for “Best Long-Form Video Achievement” and she was honored with an award for “Best Female Artist.” She claimed the award again in 2001. In 2002, she released the poignant recording The Ring, which was meant to communicate a message of peace, compassion, and humanity to listeners around the world.

Keiko Matsui’s CD Deep Blue (2001) topped Billboard’s Contemporary Jazz charts for three consecutive weeks. She is the first Japanese artist to achieve this honor.  In 2003 she enjoyed success with her recording The Piano, which featured reinventions of some of her most loved original works. In 2004 the title track of Keiko’s Wildflower was used to support the United Nations World Food Programme’s efforts in Africa. "I decided I wanted to support the WFP after learning about the tremendous problems in Africa and how humanitarian assistance can change people’s lives for the better," shares the activist. Keiko has also collaborated with Asians for Miracle Marrow Matches (A3M) in numerous charity concerts. In addition, proceeds from her 2001 mini-CD, A Gift of Life, went to The National Donor Program and Marrow Foundation in support of A3M. In December 2009, the highly sought-after pianist was asked to put together a Christmas show at the Blue Note club in Tokyo, which was a major success and in November 2010 she made her highly anticipated debut at the Blue Note in NY, which was sold out. In 2011 Keiko recorded with fellow pianist Bob James on a four-hand piano project called Altair & Vega. Keiko’s depth as a composer has also allowed her to contribute music to soundtracks in Japan, the U.S. and Russia. She also released her critically heralded Billboard Top 5 recording The Road… which featured Cameroonian bassist Richard Bona and saxophonists Kirk Whalum and Jackiem Joyner among others. In 2013, Keiko Matsui celebrated the release of her critically lauded album Soul Quest, which is the musical inspiration behind Live in Toyko. The same year she was also an invited guest in Istanbul for International Jazz Day alongside such luminaries as Herbie Hancock, Branford Marsalis and Terence Blanchard. With the release of Journey To The Heart, Keiko confirms her place as one of the most dynamic and important voices in instrumental music and assures us that her journey continues.

“We need to find that common bond in our hearts. People are dying with violence, hunger and war. This music is my new journey,” concludes Keiko Matsui. “It is an evolution in many ways. I hope I can make a path and make some noise and leave a positive effect on the world. This is my mission and I am dedicating my music to this cause.”