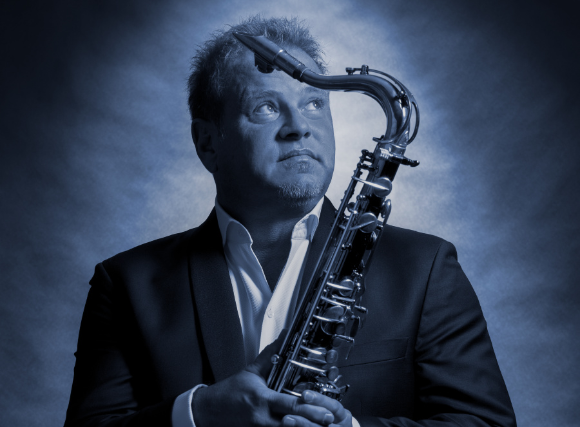 Euge Groove’s musical sensibilities are hard-won. Born Steven Eugene Grove in Hagerstown, Maryland, he grew up in a musical home. His mother played piano and taught the church choir and Euge began his musical pursuits at the age of seven, beginning with piano and adding saxophone at nine. Two saxophonists had a profound effect on his approach to playing. “One was French classical player Marcel Mule, who really defied what the sax was supposed to sound like for me and the other was David Sanborn, who took that sound and brought it into the mainstream world,” Euge reminisces. Through the years, Euge’s love of Jazz, R&B, Gospel and Blues have all come together to inform his personalized sound. He explains, “I’ve listened to everyone from Grover (Washington, Jr.) and Sanborn to (Charlie) Parker and Coltrane, as well as (Michael) Brecker, (Stan) Getz, King Curtis, Jr. Walker, Richard Elliot and Kirk Whalum. The more mature we become the more those influences fuse into something new. A graduate of Miami’s School Of Music, Euge launched his professional career in Miami in the mid-80s, playing in salsa bands, Top 40 club bands and doing the occasional high-profile session date like Expose’s “Seasons Change,” a #1 Billboard AC hit. In 1987 he moved to L.A., wrote a track for Richard Elliot’s The Power of Suggestion and Elliot recommended Euge to take over his spot in Tower of Power. Euge toured with TOP for four years, including a year backing Huey Lewis & The News. He went on to record, tour or perform with the likes of Joe Cocker, The Eurythmics, The Gap Band, Elton John, Bonnie Raitt, Aaron Neville and Richard Marx (that’s Euge’s horn on “Keep Coming Back,” a #1 AC hit duet he recorded with Luther Vandross). In 1999, Euge started recording his own material, dubbing himself Euge Groove, and posting his music on the now-defunct MP3.com website; downloading started almost immediately and Euge was soon topping the MP3.com Jazz chart.He signed soon thereafter with Warner Bros. “Vinyl,” his first single from his eponymous Warner Bros. debut, set a record by spending 27weeks on the R&R charts, eventually ranking #24 for the year. In 2004, Euge Grooves’ Narada debut, Livin’ Large, spent 68 weeks on the Billboard charts. The title track was the #5 most played song for 2004 on the R&R singles chart. Just Feels Right followed in 2005 and its first single was #1 for two months. There followed in the next decade a string of hit singles and best-selling albums; his hit “Religify” was ‘song of the year’ in 2007, and his albumsS7ven Large and House Of Groove each spawned #1 hits.Got 2 Be Groovin’came in 2014 and 2016 saw the release of Still Euge, which featured the hit title track as well as memorable vocal appearances from Oleta Adams and Rahsaan Patterson.Euge Groove further asserts himself as a vital force in the continuum of Contemporary Jazz and promises he has no intentions other than to Groove On! “I’ve really not known anything else. It’s been such an amazing run for the last 30 plus years. From the amazing people I’ve toured in support of to being able to do my own thing, sometimes I’ll reflect and just say “wow!” The places I’ve been and the people I’ve met.it’s like a real life fairy tale at times.”